26 May Lucerne – A Swiss icon that is sure to please

This walkable city in Switzerland is every photographer’s dream

Lucerne, Switzerland will always be one of my favorite European cities. Its core of well-preserved medieval history exists in harmony with modern architecture, business and the arts. Its location on Lake Lucerne with snow-capped mountains surrounding the town is truly picture perfect.

We were surprised to discover how many photos we took during our three days. Around every corner we discovered another idyllic photo opp. If you’re going to travel Europe, Lucerne is a must-see.

Covered wooden bridges, historic decorated building facades, and restaurants/bars lining the waterfront are among Lucerne’s many charms. Don’t be turned off if you hear Lucerne described as the tourism capital of Switzerland. The central Old Town area is compact and can get crowded, but it’s easy to lose the herd by venturing out a little to see the famous Lion of Lucerne or walk the Musegg Wall, with its series of watchtowers.

All the major sites are walkable. If you have a few days here you can explore the surrounding area by boat, train or cable car.

Hotel Waldstätterhof was our base. It sits just steps away from the train station, waterfront and renowned Culture and Congress Center.

Highlights from our Lucerne visit include:

Carved out of a sheer rock face overlooking a pond, the Lion Monument is an icon of Lucerne. Described by Mark Twain as “the most mournful and moving piece of stone in the world,” the sculpture depicts a dying lion and is dedicated to the Swiss Guards that lost their lives in the 1792 French Revolution.

Sitting on the shore of Lake Lucerne, the complex hosts 500,000 visitors annually for more than 500 international meetings and cultural events. You would expect the behemoth to stand out like a sore thumb among Lucerne’s historical buildings, with its enormous flat roof and aluminum covering. But the building is renowned for its spectacular architecture and fusion with the sky and water.

The Reuss River divides Lucerne into Old and New Towns. Connecting the two is Chapel Bridge, the oldest wooden covered bridge in Europe, constructed in 1332 to help protect Lucerne. Crossing the bridge is like walking through an art gallery with a series of 17th century paintings documenting historic events and honored saints. Much of the bridge and paintings were destroyed by fire in 1993 but have since been restored with superb historical accuracy.

Accessed from the bridge is the Water Tower, one of a series of watchtowers built in the 1300s to protect the city. Through its 700-plus years the tower has served as city hall, treasury, prison and torture chamber. It is Lucerne’s iconic image, appearing in countless photos.

Similar to the famous Chapel Bridge, the Spreuer covered wooden bridge dates back to the early 1400s and houses 67 historic paintings. Adjacent to the bridge is the Needle Dam – a marvel of engineering that works today just as it did in the mid 1800s. A series of long wooden planks or “needles” added or removed by hand is used to control the level of Lake Lucerne. 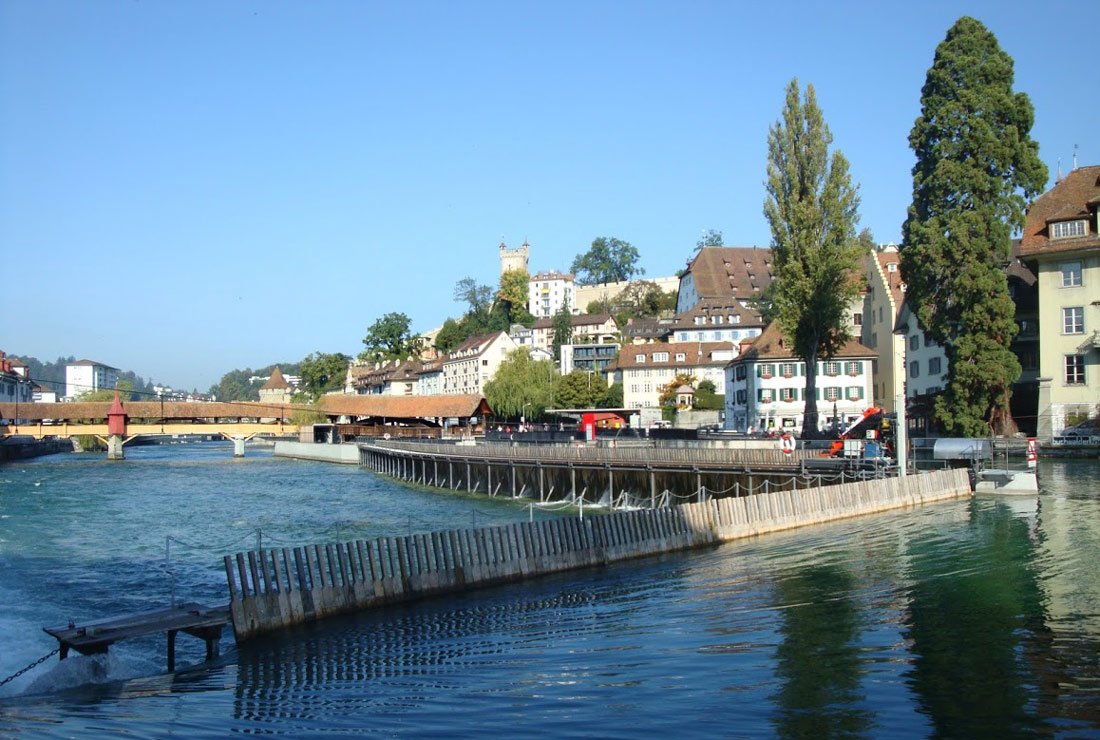 Cobblestone lanes connect old city squares dating to the 1300s in the pedestrian-only Old Town area. With timber-frame buildings painted in bright colors and elaborate frescoes you will swear you’ve entered a different time and place. Among them is the Pfistern Guild Hall whose front elevation includes the Pfistern family tree. 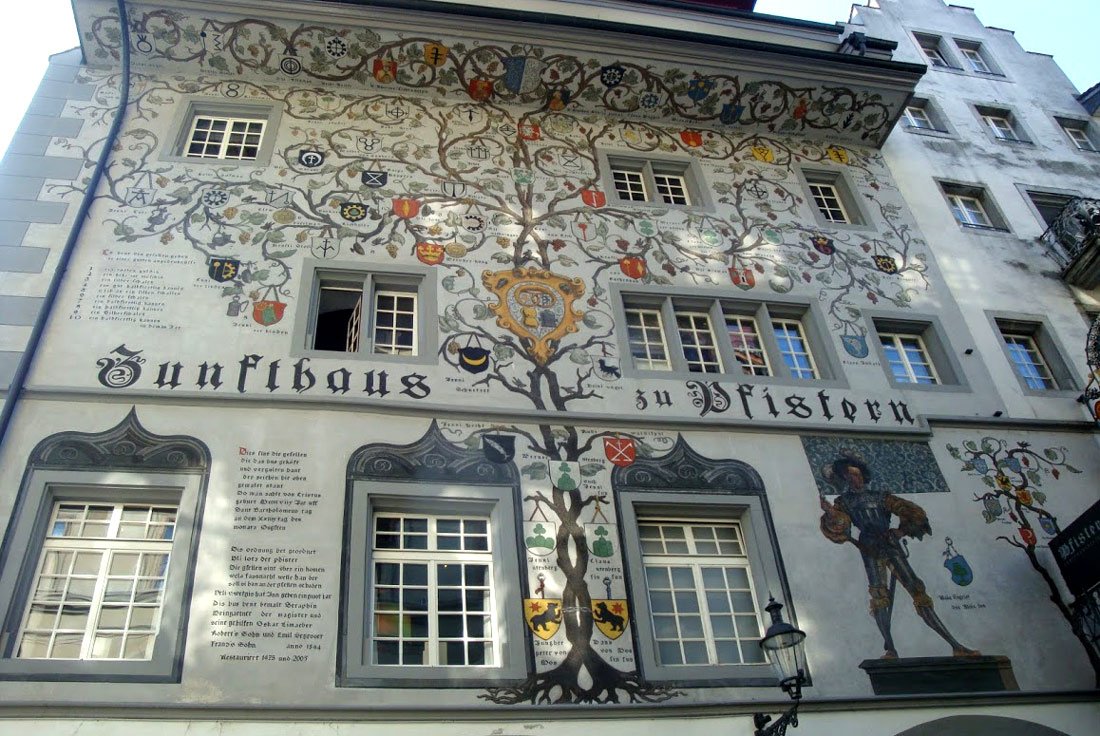 This is a chance to get your heart pumping while enjoying a birds-eye view of Lucerne from one of four watchtowers open to the public. The city wall and its watchtowers were constructed in the 1300s to protect the city. The fortifications remain mostly intact and very well preserved. Along much of the wall visitors can walk along the rampart where soldiers would have defended the city. The Zytturm watchtower houses the city’s oldest clock, built in 1535.

Lucerne’s Jesuit Church is first large baroque church built in Switzerland north of the Alps. Its architecture and location on the river are unique. Its interior features a stunning nave and high altar. Today it largely serves as a tourist attraction and concert hall. 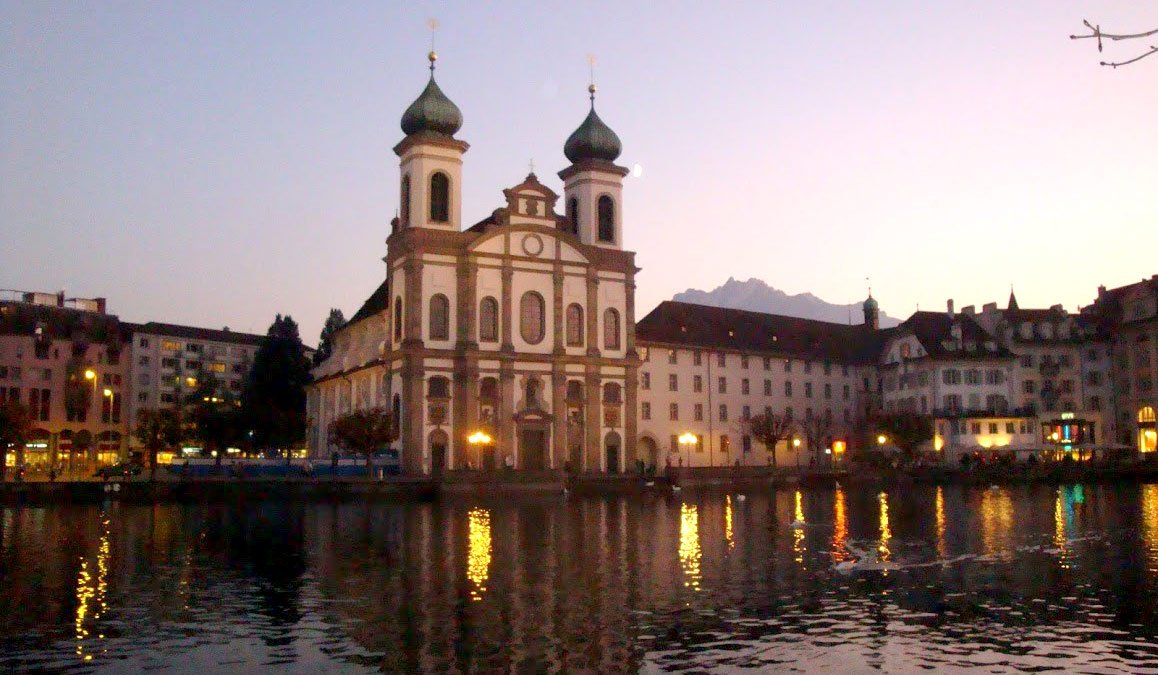 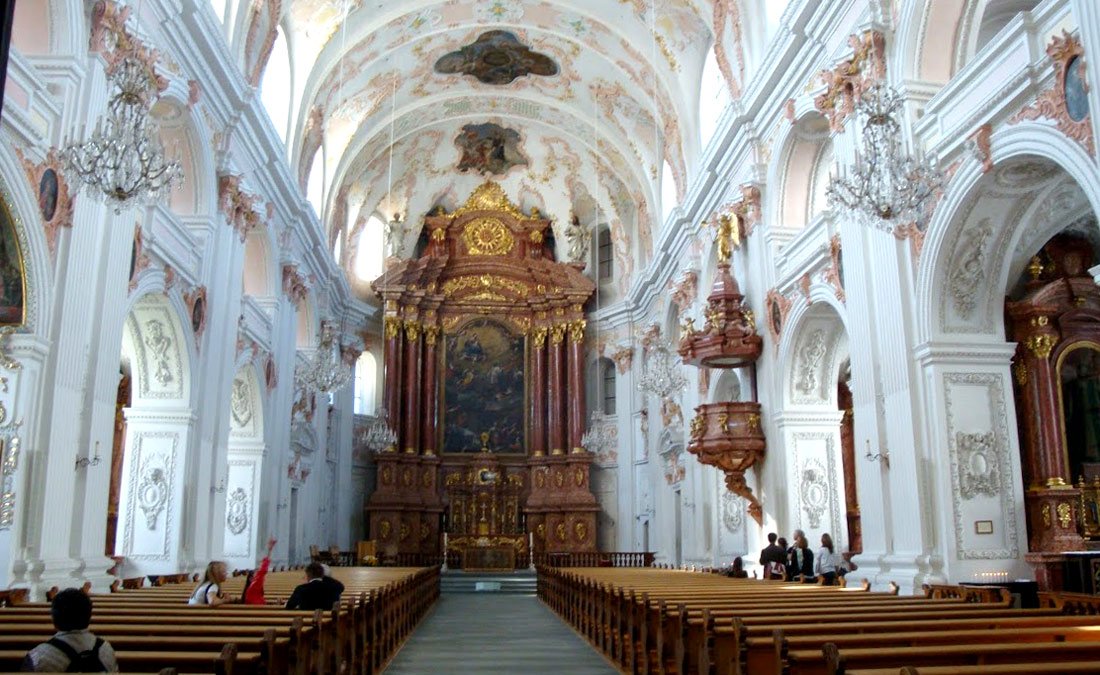 There’s plenty to see within the city, but here are two nearby excursions that are worthy of your time.

Lake Lucerne by boat
Cruises from one to six hours leave the docks in center city Lucerne. Get out and explore some of the lake’s 44 square miles. You can even elect to see the lake on an old-fashioned paddleboat steamer.

Tour a World War II military complex tunneled in a mountain
Switzerland has not fought in a war in more than 150 years, but it takes its military preparedness seriously. The country is full of hidden military bunkers and fortresses. Most have been closed since the Cold War ended.

Located a two-hour train ride from Lucerne, Fortress Furigen was constructed in 1941 to protect roads, rail and waterways in case of a Nazi invasion. Carved into the Alps, the fortress reminds you of being on a ship. It could house 100 soldiers and be totally self contained for up to three weeks. Tours are seasonal and limited to a couple of days each week.