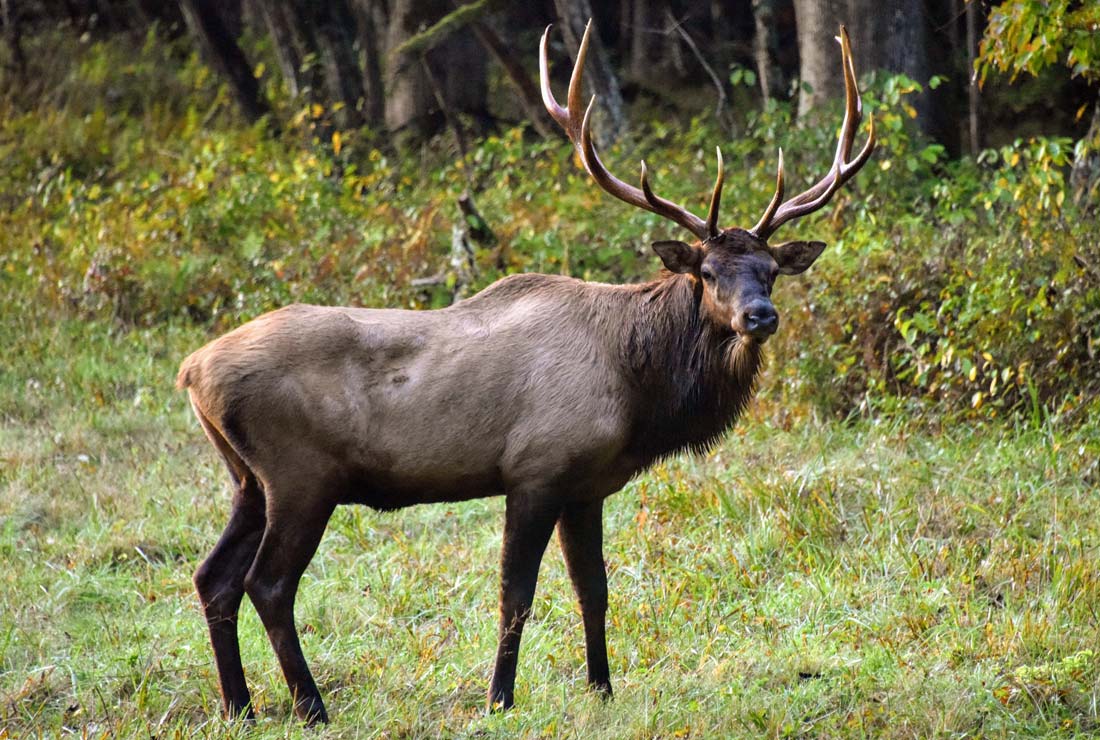 Posted at 10:53h in United States by Libby Rose 0 Comments

Thorny and I were hiking with buddies this spring, enjoying the first peek at wildflowers, when somehow the topic of elk bugling came up. Our companions related their fascination with elk bugling on a fall Colorado trip. I immediately put elk bugling on my “wish list” and started doing research on my return home.

I discovered that, living in North Carolina, I wouldn’t have to go far to see the elk but I would have to wait till “the rut” (breeding season) which occurs late August to mid October. This is the time when male elk, their testosterone raging, bugle as a challenge to other males and to woo females.

In Great Smoky Mountains National Park, which spills over the North Carolina/Tennessee border, elk were re-introduced beginning in 2001 and the herd has been growing yearly. Some of the relocated elk came from Canada. That first winter those elk must have thought they had died and gone to Elk Heaven. No massive piles of winter snow. Shorter winters. Warmer summers. Paradise found!

Herds of female and young elk can be seen all year long, (the bull elk generally head back in the hills after the rut). The first few years after re-introduction, there were some lessons learned by the park service, naturalists and the elk. But man and nature have adapted and today elk freely roam the Smoky Mountains and are doing well. Over-hunting and loss of habitat led to the disappearance of elk from the Smokies in the late 1700s/early 1800s.)

Wandering Rose Travels is proud to support Friends of the Smokies. Through that affiliation we met another supporter, Esther Blakely of Cataloochee Valley Tours. After a discussion about the beautiful Cataloochee Valley and Esther’s enthusiasm, knowledge and respect for the park, valley, animals and environment, we decided to book a fall elk trip with her! She leads small group tours morning and afternoon most of the year. Seasonally she also guides wildflower hikes and firefly night walks. Not only did Esther do the work to get permitted to lead tours in the park, she volunteers in the park as a certified interpretive presenter, giving back to the park that gives to her.

We booked the Sunrise Cataloochee Valley Elk Eco-Tour. It was an early start to an incredible morning! There were four folks total on our tour. We met at the pick up point, enjoyed pastries and coffee, and then off we went. It was a nice drive till the last few miles, which is “quite the drive” up to the Cataloochee Valley park entrance. On that morning it was a challenge to see due to thick fog. I was glad Esther was driving!

Along the route, Esther shared the interesting history of the Cataloochee Valley. We learned about the families that lived in the valley until the U.S. government bought the land to form the park. Most of the homes and communities were torn down, but luckily some structures were saved and preserved for history.

Esther has many tales to share – an interesting history for sure! After learning about the valley settlers, we learned more about re-introduction of elk to the park and how the herd has adapted since. Esther has been involved long enough to know first hand what happened to different herds or bulls, the “this and that” of facts that take this unique experience of the elk to a higher level. She has taken so many groups on this very tour and yet she still has excitement in her voice, as she says, “every day is a different experience.” I think she is as excited as those in her groups! Back to the elk. They did not disappoint, nor did the valley! The Cataloochee Valley is beautiful, especially early morning when the sun casts first light on the mountaintops and fog clings near the valley ground. This added to the beauty as elk appeared at our first stop. We saw a few females here and there, then a noise came from nearby; a bull elk bugling as a challenge to other males. He got no reply, so he rounded up his group of ladies and walked on past the beautiful historic Palmer Chapel Methodist Church into the woods and down the road. We jumped back into the car and on to our next stop.

We passed two more historic buildings — Hiram Caldwell House and a barn. Spying a large female elk herd we stopped, and heard the bugling of a big male elk. Then we heard a reply challenge call and another bull elk appeared from the woods. Esther whispered in excited tones that a challenge for the female herd was about to take place. We watched the two bulls size each other up as both turned appeared to get in a parallel stance, which might lead to antler sparring or a head to head fight. These are usually just shows to determine which bull is strongest, like rough sparring, but on occasion an elk will be injured. But that morning the older bull elk looked at his challenger and off he walked!

Changing of the herd

We witnessed the changing of leadership of the herd! It was fascinating. All of it! The new bull walked around and checked out his new harem of females. Esther shared more facts about what bulls do to make themselves appealing to the females, and how they seek the best females for mating. The facts are “interesting” and I will let you Google that or learn it from Esther! It’s always interesting to learn about different wildlife and their mating habits!

The rut had been going on for weeks when we did our tour, with the bulls going 24 hours a day, hardly sleeping or eating. We saw some bull elk trying to bugle but making no sound. They must have really been tired out by this point. It was all so fascinating. The environment was beautiful. October is a busy time for visitors in the Smokies because of the rut, but we had great views of all the action. The morning went way too fast!

We could have seen the elk on our own; driving white knuckled up the mountain, then into the valley. But going with a naturalist who knows the habits of this bull or that bull or this herd and that herd added to the incredible morning.

Another guest in the tour group summed the morning up best, “It is truly an honor to witness these beautiful animals”. 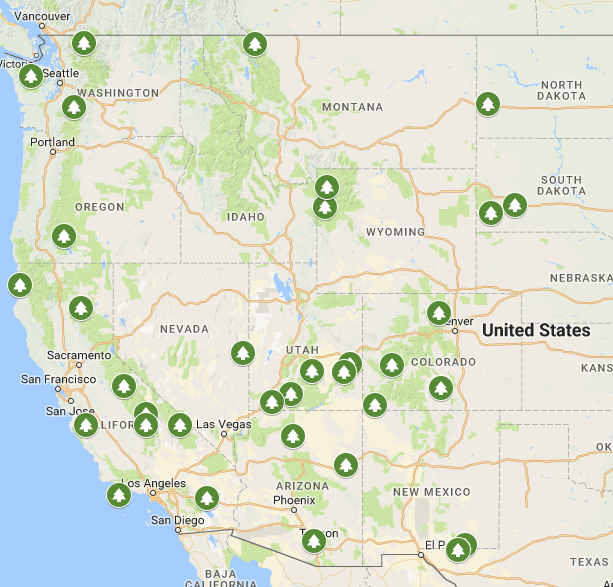 Interactive map for planning your visit to all U.S. national parks

We’ll show you where each park is, provide driving directions, descriptions and photos. How many parks have you visited? Find out!