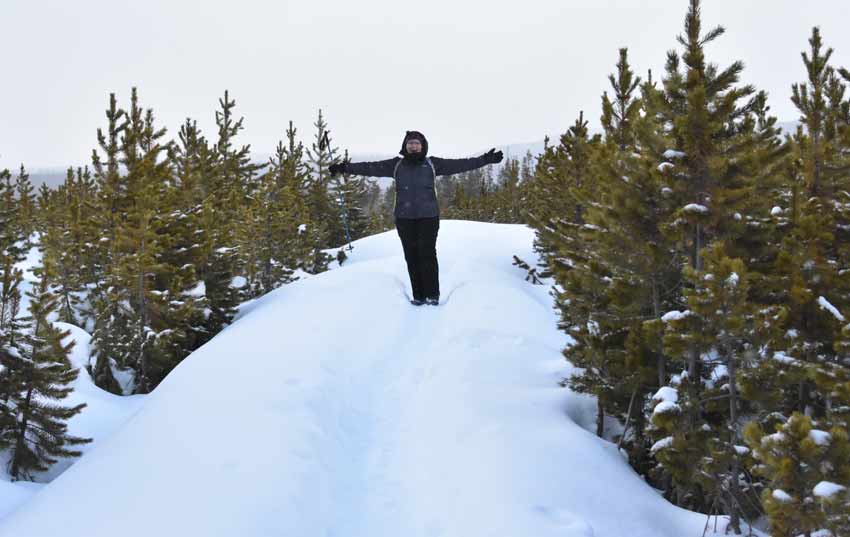 Posted at 08:17h in United States by Martin Rose 0 Comments

Our first winter snow hike is a great adventure

B and Thorny were born in the southern United States and lived our entire lives here. A few wintery snowflakes get us super excited, but snow accumulation is a rare event. So when B mentioned she would love to experience winter hiking on snowy trails, I quickly began searching for the best winter hiking destinations.

A few weeks later we found ourselves in Yellowstone National Park. With only one road open to vehicle traffic in winter, Yellowstone is a winter wonderland accessible only by vehicles with tracks or giant low pressure tires, snowmobiles, cross country skis or on foot.

National park vendor Xanterra operates park lodges, restaurants, transportation and tours during winter months. Their customer service team knows the park and did a great job of recommending tours and activities that challenged and delighted us.

We booked nine tours through Xanterra during our nine days in the park (most were half day), including a hike into Norris Geyser Basin that we hoped would fulfill our fantasy of hiking snowy trails.

Our guide wisely took us along a short, flat trail to get our “snow legs” before descending into the geyser basin. He had one simple instruction for successfully navigating the deep snow: “Step in the footprints and you will be fine.” Sounded simple enough, but with the footprints being more than a foot deep it was a bigger challenge than I expected.

After a few clumsy steps I planted my foot in untrampled snow to get a wider stance and improve my balance. With no packed snow beneath, my foot just kept going until it was up to my crotch, at which point I gracefully toppled over completely.

Getting up in deep fresh power was a challenge in itself, but after a bit of struggle I was upright and focused on carefully following the guide’s instruction to step only in the footprints in front of us. Beginning our descent into the geyser basin, I was instantly mesmerized by steamy show Yellowstone presents in winter that summer visitors miss.

Cold winter air exaggerates steam, making geysers appear 2-3 times the height of hot water spewing out. Thermal features are easy to spot because their hot discharge forms steam in the cold sky. Norris Geyser Basin is the hottest, oldest, and most dynamic of Yellowstone’s thermal areas, according to the National Park Service.

Our hike began by following a boardwalk designed to protect the fragile environment and prevent hikers from falling through the thin crust. Warmed by steam and water below, much of the ground was bare of snow while other places it piled up 2 to 3 feet. Thing got a bit jaw clenching when the boardwalk on which we were traveling was covered with 3 feet of snow … making the snow as high as the handrails!

The combination of steaming earth and snow was unlike anything we have ever experienced. It was like we had landed on another planet. Few visit Norris Geyser Basin during the winter season and halfway into our hike we hit a section of trail where no hikers had ventured in a couple of weeks, according to our Xanterra guide. That meant no footprints left by previous trekkers to make our footing easier.

It was here that I learned the meaning of “breaking trail” as our guide and two hearty trail mates walked the path ahead of our group to create footprints in which we could follow. After my fall earlier exploring unpacked snow, I declined to be among the scout team.

As we began our ascent out of the basin our guide excited pointed out a steamy spot up the hill. He explained we were looking at Steamboat Geyser, the tallest geyser in the world, shooting water 300 feet in the air. When we visited mid-February 2018, Steamboat had not erupted in four years. Our guide told us it was acting frisky and speculation was that it would erupt soon. On March 15, Steamboat Geyser erupted and has continued to erupt periodically since, Eruptions vary from every four days to 50 years.

Our climb out of the basin continued through snow-covered forests and steamy thermal features along boardwalks with snow above the handrails. It was weird and still a bit unsettling to know that boards that should have been handrails were actually at your feet with nothing between you and steamy ground.

We finished the hike safe and so excited about our first snow hiking excursion.

Earlier that day we did a wildlife tour of Lamar Valley and spotted wolves, fox, moose, elk, bighorn sheep, coyote and bison. Click to read about that adventure and see the photos.