09 Feb A side of San Francisco you’ve never seen

A walking tour for locals and tourists alike

We like to start out in any new city with a small group walking tour. It’s a great way to get oriented to a new place, learn its history, and get a sense of sites that you may wish to revisit and spend more time at.

San Francisco is a place we’ve been many times. But on our last trip, we saw and learned lots of new things thanks to a unique walking tour. We explored buildings and alleys we would never have seen following the tourist routes.

Take a walk on the wild side

After studying Trip Advisor reviews, we picked Wild SF Walking Tours. They currently rank sixth out of the site’s 284 tours. Locals J. Jo and Wild Wes founded the company while in college and it soon became their full time thing. They’re joined by a handful of other self-professed historians and artists, so tours include interesting facts, plus sing-a-longs and entertainment.

Wild SF Walking Tours limits group size to six so you get an intimate experience. Their stated mission is “to deliver the most entertaining history lesson ever, telling the stories of inspiring heroes, epic buildings and radical movements that have come to define the city.”

You can choose from five different San Francisco tours. Ours included the Barbary Coast, Chinatown and North Beach. The tour began at Union Square, where it was easy to spot Wes in his wild west outfit and ukulele.

From there we visited Barbary Coast, the name given several blocks that now overlap Chinatown, North Beach and Jackson Square. Born during the California Gold Rush of 1849, the area catered to thousands of miners who swelled San Francisco’s population with alcohol, prostitutes and dance halls. Miners were frequent victims of robbery, muggings and murder. Local law enforcement was so outnumbered that criminals thrived for more than 50 years until the 1906 earthquake finally brought an end to the mayhem.

Spoiler alert: I don’t want to give away the secrets of the tour, but I have to share one of the many cool stops. In the basement of an art supply store, we visited an abandoned tunnel and learned that it was used to transport drugged and kidnapped miners down to the wharf during the Barbary Coast heyday. “Shanghaiing” was a booming industry where able-bodied men became unwilling sailors on ships in need of crew.

Chinatown: Been there? Go again.

From here we ventured into Chinatown, a place we’ve been many times but never with Wild Wes. It’s the largest Chinese community outside Asia, one of the most densely populated areas of San Francisco, and draws more visitors annually than the Golden Gate Bridge.

We saw the usual tour highlights: Grant Avenue, Chinatown Gate and the painted balconies of Waverly Place. But we also saw and learned so much more about how Chinatown came to be in the mid 1800s, when Chinese immigrants arrived in mass numbers seeking gold or jobs, most famously as part of the Transcontinental Railroad.

The area has seen gang wars, bubonic plague, race riots and destruction in the 1906 earthquake. Today it is a bustle of sights, sounds and smells, and home to endless restaurants that cater to locals and visitors alike.

We learned history and the stories of colorful characters as we strolled alleys too narrow for cars to pass. We toured the first fortune cookie factory, where 20,000 cookies are still made by hand daily (and yes, we sampled a few). And we were entertained outside Jun Yu’s Barber Shop by Wes on ukulele and a local man on erhu (a two-string Chinese fiddle). 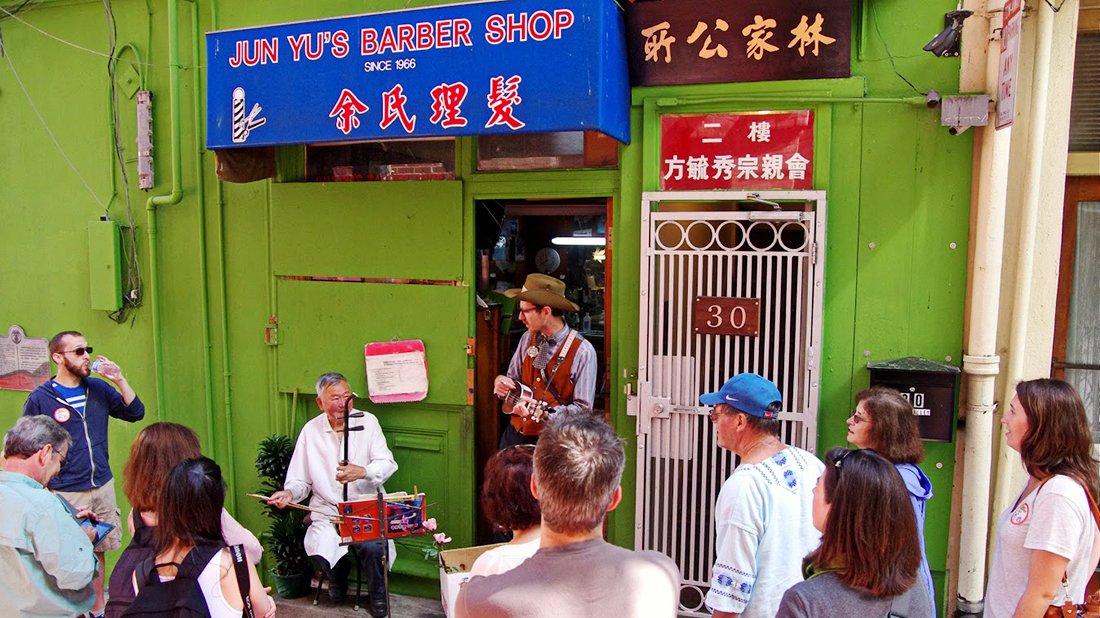 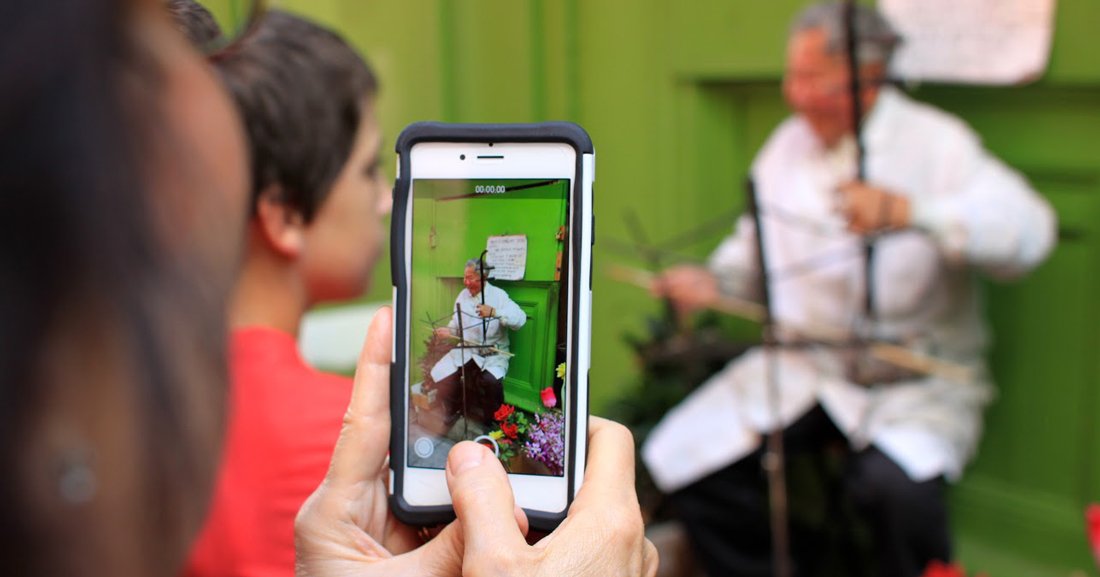 North Beach: An Italian neighborhood with a beatnik past

All-to-soon we left Chinatown and entered North Beach, the “Little Italy” section of the city and epicenter of the beatnik movement of the 1950s and 60s. It once actually fronted the bay with warehouses, fishing wharves and docks. In the late 1800s the area took on its Italian character that still exists today. Baseball’s Joe DiMaggio grew up here and lived for a time with wife Marilyn Monroe.

On The Road author, Jack Kerouac, is credited as a founder of the beatnik movement that rejected standard values and supported drug use and sexual exploration. The lifestyle caught up with Jack, who died at age 47, but not before he left his mark on the city. Jack Kerouac Alley is full of beatnik-related plaques and frescoes. Turn the corner and you arrive at City Lights, a bookstore founded in 1953 and committed today, as it was then, to “world literature, the arts and progressive politics.” Book lovers and beatnik followers from around the world visit to take in this literary landmark of alternative culture.

Some three hours after it all began, the tour ends with one more surprise … a hidden rooftop view over North Beach, downtown, the Bay and Alcatraz. 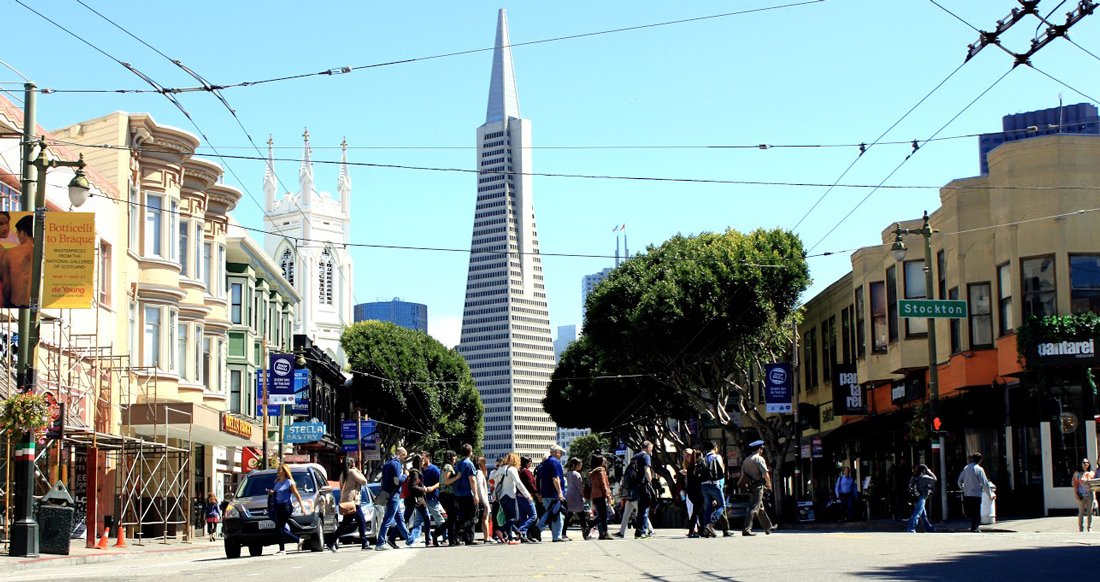 If it’s boring, you’re not doing it right

When we discuss walking tours, a frequent response is, “We tried one, but got bored.” If that sounds like you, try this one. You may laugh, gasp and/or cry – but you won’t be bored.

Explore more with our blog of Things to do in San Francisco.