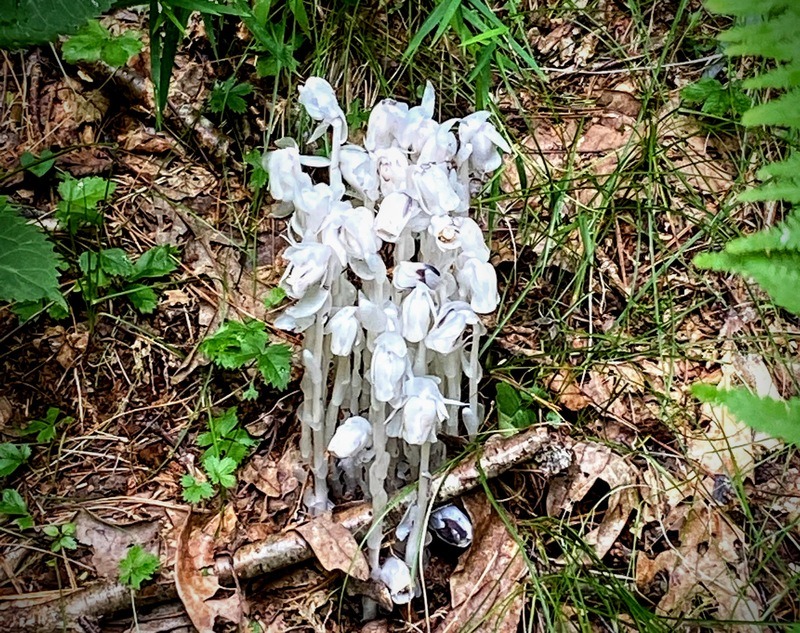 09 Jul Ghost Pipe, aka Indian Pipe, wildflower is rare, mystical and appears above ground just one week each year

Posted at 08:34h in Trip Activities by Martin Rose 0 Comments

Updates for 2021: Ghost pipe / Indian pipe is plant with no chlorophyll; found in most U.S. states

Wandering Rose Travels readers like one oddity of nature … in fact they liked, commented and shared it 12,600 times! Our Ghost Pipe (or Ghost Plant, Indian Pipe or Corpse Plant) wildflower post is by far the most popular in our three years on Facebook.

Never heard of this wildflower? Neither had we until hiking in July with contributor Jim Tobalski. A perpetual student of plants, wildlife and birds, Jim teaches us to fully appreciate and be aware of all that is around us when hiking. On a recent hike we were on high alert after after seeing reports of sightings of the rare plant Ghost Pipe.

We were lucky to discover two different groupings while hiking abandoned logging roads in Ashe County, North Carolina. We don’t claim to be botanists or any kind of wildflower expert, but we’ve learned a lot by researching reputable internet sites and hearing from Wandering Rose followers who commented on the post.

Update: We hiked the same area in June 2021 and discovered many groups of these rare plants in different parts of the property. Often these rare flowers hide among ferns or other forest foliage so you have to look carefully and maybe move some fern leaves if you spot an area that seems conducive to supporting this beauty.

Ghost Pipe appears above ground for just one week

Ghost Pipe is known by many names, most commonly Indian Pipe, Corpse Plant (it turns black after blooming) or monotropia uniflora for those in the know. While Ghost Pipe grows wild in most of the United States (except the Southwest), sightings are rare and each plant blooms for just one week annually. The other 51 weeks each year this mysterious plant lives completely underground. Unlike most plants, it contains no chlorophyll, giving it a “ghostly” translucent image and its name.

For the most part, plants make food from the sun’s energy through photosynthesis and chlorophyll. I’ll stop the explanation here, or my plant ignorance will become apparent. A few including Ghost Pipe belong to a clan called heteromycotroph, getting nutrients from soil fungus that in turns gets its nutrients from the roots of mature trees in forests.

Leaves, stalk and flower are all a ghostly translucent white, ranging in height from 4 to 12 inches tall. Each steam bears a single flower, which points down like a pendant on emergence from the ground. As the flower matures it gradually becomes upright before releasing its seeds and withering away. This process is one week from beginning to end and the plant blooms from late June to September depending on location.

Poet Emily Dickinson called Ghost Pipe “the preferred flower of life” and her first book of poetry features it on the cover.

Many proclaim its healing power, including several Facebook post responders who use Ghost Pipe medicinally. Long before Europeans arrived, native North American Indian tribes used the plant as medicine. Cherokee tribes reportedly used the root to prevent convulsions; Mohegans used the plant as a pain killer and Cree chewed the flower as a toothache cure.

Ghost Pipe sightings are reported by Facebook post viewers across much of the United States. Many remember seeing the plant as a child but not in adult life. One reader recalled the plan was so unique even 60 years ago that a magazine did a photo essay on flowers growing above her grandfather’s garage.

Another reader remembers going in the West Virginia woods as a child each year with her grandmother who always knew when and where to find Ghost Pipe. Others shared photos they had taken plant, some not knowing what they were seeing prior to our post. Ghost Pipe is actually kin to blueberries, though I have no idea how. I simply pass along with the scientists say. A common theme with everyone is a great respect for this wonder of nature. Even those not knowing what they were seeing knew they had discovered something unique and mystical.

If you have photos or stories about Ghost Pipe please share with us via the comments section below. We will include them in a future Facebook post.

And if oddities of nature are your thing, check out this article on meat-eating plants to continue your education. 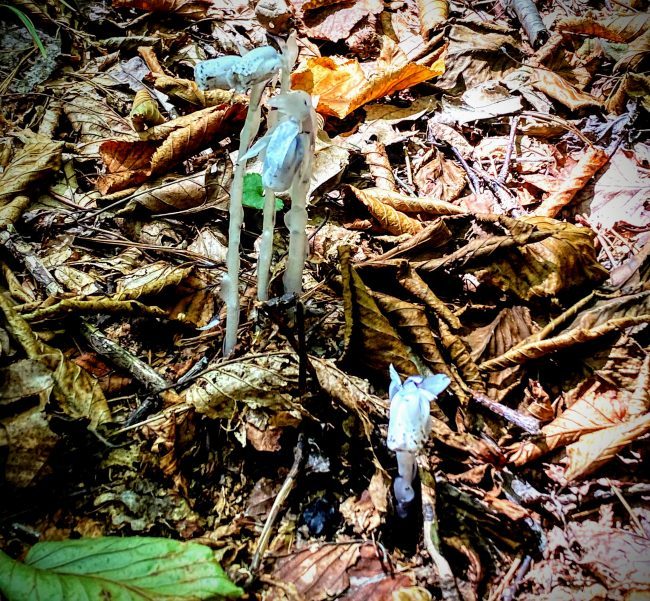